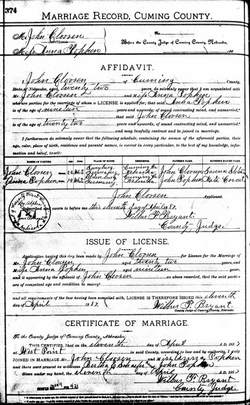 The following story of John's arrival in America was posted to Ancestry.com by user Stpopken4:

Scott Mahonney wrote to the Bremen State Archives in Germany to find out the mystery surrounding John Claasen’s arrival in the United States. According to his obituary he worked for the German and Italian merchant marines before coming to America in 1883; according to his naturalization papers he came to America on the steamship Neckar which arrived in New York on or about March 27, 1884 (but his name could not be found on the ship passenger list); according to Scott’s grandfather Uehling, he was a sailor who jumped ship in New York.

The Bremen State Archives has copies of ship records (passengers as well as crewmembers). According to those papers “John Claasen” became a sailor on the steamship Neckar on November 6, 1883 and was listed as a deserter (with four other crewmen) on March 29, 1884 while the ship was docked in New York. John was 14 years old at the time. The papers include his birth date (September 11, 1861) which is his correct birthdate.

According to a map of Germany Diele is a tiny village just south of Weener in the district of Weser. Maybe Werner is a mistake for Weener and maybe Weisser is a mistake for Weser. Emden is a port city north of Diele so maybe that’s where he went when he first ran away from home and joined the merchant marines. The city of Swayburg could be misspelled and means Schweiburg, which is just south of the Jade Bay.

Diele is also only 5 miles or so from the Dutch border which might explain the spelling of “Claasen.” Scott’s grandfather always said it wasn’t a German name. The Germans spell it “Clausen” but in Dutch it’s “Claasen.”

According to Scott’s grandfather, John told him that his parents died when he was a boy (killed in the Schleswig-Holstein war) and he was taken in by an Aunt and Uncle. They did not treat him well and when he was 13 or 14 years old, he ran away and found work on a ship.The ship he worked on landed in New York and he became very impressed with the country. He heard stories of Germans who had settled in Nebraska, so the next time the ship landed in New York, he jumped and went west to Nebraska. It could be that no one new he was a deserter until Scott received the records from the state of Bremen. 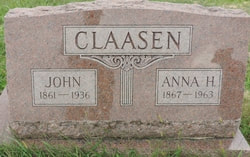