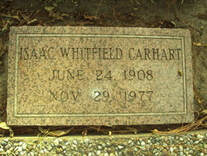 Mr. Carhart was the son of the late Whitfield and Bessie Chamberlain Carhart. His grandfather, Isaac Whitfield Carhart, was mayor of Clarendon. He was a graduate of Texas A&M with a degree in electrical engineering. In 1933 he was married to Frances Carolyn Tull of Greenville. Mr. Carhart was a member of the Society of Professional Engineers and a veteran of the Navy, serving in World War II.

Isaac 'Whit' Carhart
LAKE JACKSON -- Services for Isaac Whitfield "Whit" Carhart will be Thursday at 10:30 a.m, at St. Timothy's Episcopal Church.  The Rev. Michael Klickman will officiate.  Burial will be in Restwood Memorial Park.
Whitfield, 69, of 510 Circle Way, was an area resident for 22 years and a retired electical engineer for Dow Chemical Co.  He was a veteran of the Navy, serving in World War II and a member of the Society of Professional Engineers.  He died Tuesday (Nov. 29, 1977).
Carhart is survived by his wife, Frances; two sons, Dr. I. W. Carhart Jr. of Yakima, Wash., and R. M. Carhart of Houston; a brother Rufus Carhart of San Antonio; and three grandchildren.
Pallbearers will be Jack Crouch, Jim Edwards, Bert Haas, L. K. DeZavala, Jack Zylks, Larry Packard.
In lieu of other remembrances, the family requests that gifts be made to St. Timothy's Memorial Fund.
Arrangements are by Freeport-Lakewood Funeral Homes, Inc.

[Photo added to Find A Grave by Lois Martin McDonald]

She was born March 26, 1910, in Smithville to Matsey and Milton Tull. She attended Texas Woman's University for three years, majoring in commercial art, and she married I. Whitfield Carhart in Greenville in 1933. They made their home in Lake Jackson where she was an artist.

She lived in Yakima, Wash., for the past 11 years.