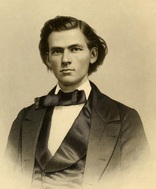 John married Theresa A. Mumford (378) on 6 Oct 1857.  Theresa was born 1837 in Richmondville, Schoharie, New York, United States to John Hamilton and Mary Mumford.
John and Theresa had the following children:

FATHER OF AUTO DIES
Dr. J. W. Carhart, 81, Former Pastor and Mechanical Genius, Passes.
Oshkosh, Wis., Dec. 21.
Relatives here received announcement of the death of Dr. J. W. Carhart, 81, this morning at San Antonio, Texas.  He was known in Wisconsin as the father of the automobile, having invented the first machine of that kind.

He was identified in the early days with road engines which had a race from Green Bay to Madison through Oshkosh.  His first automobile was a crude affair, but it got over the roads at a fair rate of speed and it was from this machine that the present day automobile was perfected.

Dr. Carhart was a for a number of years pastor of the First Methodist church here, later acting as presiding elder of this district.  He was also pastor at Racine, Wis., and it was at the latter city that he perfected the automobile.